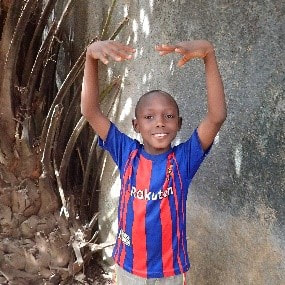 Last year of school attended before dropping out: 3rd Grade

​Abdoulaye is called "short boy" by everyone at the center because he is so tiny, but he has more confidence than all other students combined!

11-year-old Abdoulaye had dropped out of school when his parents could no longer pay school fees. His father’s work in construction was irregular, and with a large family of five siblings, it was hard to get by.
In 2018, Abdoulaye’s family learned about MindLeaps and he was enrolled in the program. From the first, he was very flexible, but didn’t seem to have the energy to push himself in dance class. With the support and encouragement of his teachers, Abdoulaye worked steadily to build up his strength.
He is the leader of his class, knowing all of the terms and could teach the warm-up by himself. He stands front and center every class and listens to and understands every correction given in the dance classes. The younger group did the circle choreography class and he watched the last 5 minutes of it, and the next day he remembered everything he saw and was able to perform it for everyone.  ​
Today, in fact, Abdoulaye is a really strong dancer. He’s shy and doesn’t talk a lot, but he loves dance. He’s now part of the MindLeaps Performance Group and has performed publically with the group in two shows. Though he’s only 11, Abdoulaye is very confident before an audience!
MindLeaps sponsored Abdoulaye’s return to school and he’s now in 3rd year primary. He also comes to the MindLeaps after-school program to get extra help with his subjects. His family is unable to provide him with books, which can be a problem for his studies. To further encourage him to attend the after-school program regularly, MindLeaps makes books available to him at the center.
Abdoulaye says one day he wants to be a professional dancer and work for MindLeaps!
​

Abdoulaye is being sponsored in 2021-22 by LaMar Baylor.