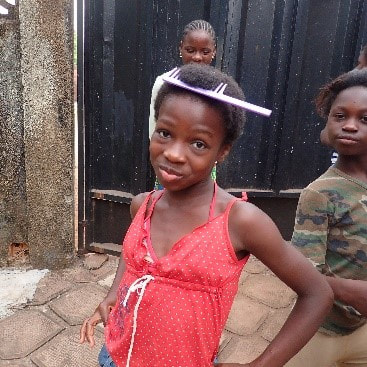 
​Aicha loves studing English.
​
Aicha's teachers at MindLeaps describe her as respectful and hardworking during class, but can make the teachers laugh just as much as the other students, simply with her charismatic personality. Her favorite dance move is a jazz walk. Aicha has multiple dreams - she hopes to become a tailor, but she also loves studying English and would love to be a journalist some day.
​

14-year-old Aïcha comes from a family of four brothers and three sisters. Aïcha was to start 4th-year primary school, but as her father didn’t have a steady income, she wasn’t able to continue her schooling. She had been out of school for a year and a half when she began the MindLeaps program at the end of 2020.
Dance class was a challenge for Aïcha at first. It was difficult for her to follow all the new movements, plus she had a previous knee injury from sports. With dance, her knee began to hurt again and she didn’t want to continue with classes. MindLeaps reached out to her family so they would understand the importance of regular attendance, and her mother then encouraged her to keep coming to class. MindLeaps dance instructors also worked with her on the knee problem, so she could get used to dancing without any pain. Now her knee no longer bothers her and she has begun to love dance. She’s very motivated and wants to be the best in class! Because of her perseverance and determination, she was recently chosen to be part of the MindLeaps Performance Group.
Aïcha says her favorite classes at MindLeaps are French and dance, especially dance. She had never studied English before, but she’s now learning the basics in her English class. Aïcha says she’s happy at the MindLeaps center – she has made new friends and feels comfortable in the supportive environment.

​
Aicha is being sponsored in school in 2021 by Kathy Wilkens.