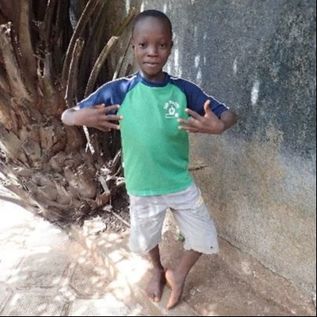 Dropped out of school during 3rd grade

​
Baba would like to become a doctor in the future so that he can help his mom.
Baba lives with his mother and sister in one room. They only have enough funds to eat once a day and were evicted from their previous place. He had to drop out of school two years ago because they could not afford the fees.

Baba Is the smallest boy at the center but he is the hardest working student with the best discipline. Baba also has a lot of compassion for his fellow students; if a student has been disciplined by a teacher, he will always make room for the student to stand next to him. Baba has multiple dream careers for the future: he would like to become a soldier so that he can travel, but he would also like to become a doctor so that he can help his mom when she gets sick.
​

12-year-old Baba is one of three children in his family, along with one brother and a sister. His father runs a small shop and his mother sells clothing and food items in the market. His parents are now separated, so Baba and his siblings live with his mother and grandmother in the Nongo district of Conakry. He had been at primary school for two years when the family was together, but when he moved to Nongo, public school was too far away, and his family could not afford to pay for private school. His studies came to a standstill, and he had been out of school for a year and a half when he first came to MindLeaps.

When Baba joined the MindLeaps program, he was withdrawn, keeping to himself and not talking with the other children. Everything was new and he wasn’t used to being outside of his own home. But as he adapted to the new surroundings, he begin to overcome his shyness and make progress in the skills areas embedded in the program.
​
At 9 years old, in 2018, Baba was selected for school sponsorship and returned to primary school. He was placed in year 1, to review and close the gap created by his long absence from school. He is now in year 3, and also attends the MindLeaps after-school program three to four times a week. In the after-school program, he gets additional help with school work in math, reading and writing in French. Before returning to school, he spoke only his local language. His French language skills have come a long way over the time he has been back in school. Baba is not only handling his studies, but also helps his mother and grandmother selling in the market on weekends and whenever he’s free after school.

​
Baba is being sponsored in school in 2021 by Kathy Wilkens.