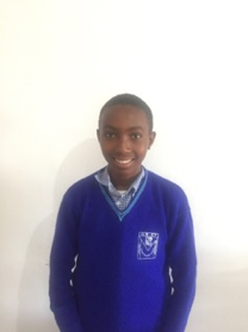 Butera wants to be a weather scientist when he grows up so he can address climate issues that affect families like his own.
​
Butera is 18 years old. He joined MindLeaps with his older brother in 2018, after one year of living on the streets. He had previously dropped out of school because his family could not afford the school fees, and they even struggled to afford food. Thus, moving to the streets was Butera’s only other way to survive.

Since joining MindLeaps, Butera has moved back home and is living with his mum and brother again. Before the COVID-19 pandemic, his mum was participating in a government-run program, VUP, which supports families living within the country’s lowest bracket in terms of economic status. The VUP program aims to establish a financial foundation for families to be able to then support and sustain themselves. Butera’s mother finished one full contract in the program but continues to struggle to make ends meet. They usually have just one meal a day.

The COVID-19 pandemic has exacerbated Butera’s family’s struggles. In order to earn a living, Butera’s mother enrolled him and his brother into the local garage to learn mechanics where they each earned a stipend of 50 cents per week to pay for food. While Butera was learning new skills, this shifted his focus entirely from school to mechanics, and his mother was determined that he would not go to school as she needed his help to earn money to survive.

The MindLeaps’ staff went to the garage in attempt to convince Butera of the value of continuing in school, but he was adamant that he could not go back to school as he would have to leave his mother, and he was not prepared to do that. Finally, an agreement was made as MindLeaps offered to support Butera’s mother with her business, and this way both Butera and his brother could both attend school. MindLeaps is currently working with the local authority to make sure Butera’s family is being supported as much as possible. Butera is now re-enrolled in school and is in grade 7 at Cyivugiza Primary School.

Butera is a very smart boy. Given his difficult circumstances, we recognise that he would be safer attending a boarding school, as this would mean he would have reliable meals each day. He would also not be distracted with the garage, which easily takes his focus off school as it is something that he enjoys, and he also knows it helps his family out. However, he will need to work very hard to achieve the grades to be given the opportunity to study at a boarding school. That said, Butera has already made it clear that he would prefer to skip a year at school by achieving good grades so that he can move closer to finishing school and getting a job.

In school, Butera’s favourite subjects are science and mathematics. Given these interests, as well as his new first-hand experience in the garage, Butera would like to be a mechanic when he graduates from high school. In Rwanda, this is a complicated profession as there are no undergraduate programs at university in mechanics, however there are some vocational training schools which offer 3-year programs where he could study automobiles, but not to a high level. This means that this desire may be unsustainable in the long-term unless he has the chance to study abroad.

As a person, Butera is very respectful and quiet in general, except for when he is in the dance studio! He enjoys dancing from time to time – this is how he interacts with his friends and has fun. He communicates well with the other children at MindLeaps.
Butera is close with his brother, partly because of all the responsibilities they share. They really work together to help each other out. He also has a very close relationship with his mum. Butera is very balanced and humble, and is usually the one to reconcile any disagreements between his mum and brother. Butera puts his family before himself and says that if his mum and brother are happy, then he is happy too.
​
Butera has lots of friends at MindLeaps, but his best friend is Thierry, who also spent time at the garage during the COVID-19 pandemic. Both the boys want to learn how to drive and even came to ask the MindLeaps’ staff for the driving syllabus so they could learn the curriculum!
​
Butera is a great kid and has so much to offer. We hope that, in time, his family life becomes more stable so that he can focus on himself to succeed in his studies. As described by the MindLeaps’ staff, Butera is a “great young man” and is deeply loved within the MindLeaps family.

Butera is being sponsored in school by Debra Maller.