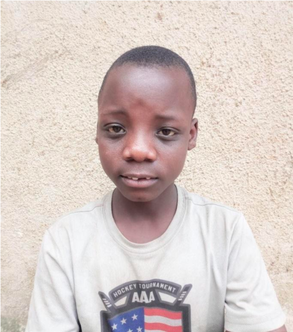 
Didier hopes to be a bus driver when he is older.
Didier lives in Nyakabanda with his parents and five other kids, one of whom is a cousin that his parents took in. His dad sells sewing needles, and his mother sells bear and shoes in the market. Neither of these jobs makes very much money, so MindLeaps has been a big help in putting Didier through school. He enjoys the Acceleration Program and likes playing with his new MindLeaps friends!
​

Didier is 11 years old and is currently in grade 6 at Cyivugiza Primary School. He joined MindLeaps in 2018 after dropping out of school in grade 4. Didier lives with his mother and siblings.

Didier is one of the smartest children in MindLeaps and is extremely focused on school – he is currently ranked top in his class! During the COVID-19 pandemic, he has been extremely responsible and never needed reminded to do his homework – he was always on top of it. Didier loves school and strives to achieve the grades that will allow him entry to boarding school. At boarding school, his life conditions would be much safer, and he would be sure to receive three meals a day, which he currently does not get. This would allow him to focus purely on his studies. He is currently studying for his grade 6 national exams which he will sit later this year.

By studying hard, Didier forgets about his problems. Even if he does not find anything to eat one day, he will usually cry for a while but then gets back up and keeps going. However, Didier never complains and would not explicitly say if anything was upsetting him.

Didier comes to MindLeaps every afternoon after school, and at the weekends too. Currently, he is also attending school at the weekends to catch up from time missed during the lockdown this year when his school was closed. While Didier enjoys dance, he prefers academics. He also loves spending time with his friends and being crazy with them!
Didier is very shy, especially with other children he does not know, or adults. However, he is very attentive. This is his way of showing respect. When he is with his friends, he is very excitable, energetic and loves playing together. For a child of his age, Didier is extremely responsible and grounded.
​
Overall, Didier is a wonderful kid with huge potential. When he first joined MindLeaps, he was lonely and lost, and he found it difficult to express himself. Over the years, he has learned how to interact well with other children, and he has formed very close friendships. He is now also focused on school and values the opportunity to learn and grow.
Didier is a beacon of hope, and we know that no matter what obstacle is put in his way, nothing will ever stop him achieving great things. In the future, Didier dreams of becoming a teacher.

​
Didier is being sponsored in school in 2021 by
​Jewish Helping Hands.