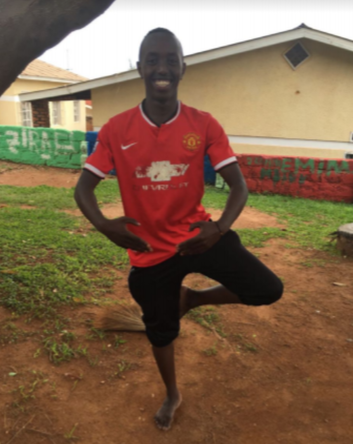 Last Year of School Completed Before Dropping Out: 5th Grade

​​In his spare time, Didier choreographs in MindLeaps dance studio.
Didier lives with his mother, aunt and brother Passy, who is also a MindLeaps student. His father is deceased. Dancing is one of his favorite hobbies and MindLeaps has given him many different ways to be involved in dancing: he watches contemporary dance videos, choreographs in his spare time in the studio, and asks to participate in teacher dance trainings to improve his ballet technique. In the future, he wants to work for an organization that helps kids.
​

Didier is 20 years old and joined MindLeaps in 2015 with his younger brother, Passy.
Their father sadly passed away some time ago, and the family was left without a home as their
mother was unable to pay for the costs of rent herself. Furthermore, she struggled to afford the
boys’ school fees and food, so both Didier and his brother were forced to drop out of school. During
that time, they both wanted to earn money by playing soccer. However, they ended up spending
two years on the street selling stolen items to afford food.

Didier and his brother live with their mother in a neighbourhood of Kigali called Nyamirambo. This
neighbourhood is being gentrified but remains considerably disadvantaged compared to other parts
of the city. Didier’s family stays in a high-risk zone at the top of a hill where he lives in a tiny room
with his brother and mother, sharing the same mattress to sleep. Didier’s family is currently being
relocated by the government to a different area of Kigali because of the risks they face in
Nyamirambo.

Despite their difficult living conditions, Didier is always optimistic for tomorrow, even if he does not
have food to eat today. He has a beautiful relationship with his mother and is very understanding of
his home situation. Didier and his brother’s personalities are like chalk and cheese – Didier keeps the
peace whenever there is tension or upset between his brother and his mother. All in all, Didier is
respectful, humble, and hardworking. Despite their differences, Didier says his best friend is his
brother, Passy. They currently attend different schools, but they always stay in touch and enjoy
spending time together during the holidays when Didier returns from boarding school!

When he re-enrolled in school, he was awarded a scholarship to return to primary school, as he had
previously dropped out in grade 3. He was already 17 years old, so this was understandably hard for
him as he was much older than the average student in his class. Didier completed a tutoring
acceleration program at MindLeaps so that he could sit the national exam immediately. He passed
his exams and is now in grade 9, soon to begin grade 10 after he sits his national exams this summer.
Didier is currently studying at APEAR Secondary School. Didier is excelling in school and has become
very strong academically. He is very focused and never needs to be reminded to study. He is always
ranked among the top three students in his class! After joining MindLeaps, Didier quickly recognised
the value of education, and this is where is interest and desire has remained ever since. This sets him
apart from other children because most kids just want to dance without attending school!

At Didier’s school, dance is offered as an extracurricular activity. Thus, even when he cannot attend
MindLeaps’ dance classes during the term, he continues to practice and improve his dance
techniques at school. There are other MindLeaps students at APEAR Secondary School with Didier,
and they enjoy dancing together in their free time, where they are given a sound system and space
to dance. Ever since Didier joined MindLeaps, he has had an immense passion for dance. He
performed in the Ubumuntu Arts Festival with his brother where they danced as a duo! Since then,
he has performed twice more.
​
Didier says that his role model is Dane Hurst, a professional dancer from South Africa who visited
MindLeaps in Rwanda and spent time with Didier. They connected over their love for dance. Didier
was inspired by Dane and now looks up to him and hopes to become like him one day.

We are very proud of Didier’s positive attitude to every aspect of his life, including his difficult home
life and his determination to succeed in school. Didier is a great team player and is very easy to get
along with. He has been described by the MindLeaps staff as ‘thoughtful’. Didier dreams to go to
university to study IT and dance.
Didier has been sponsored in 2021!