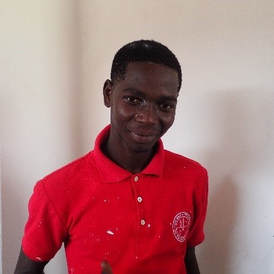 
​Ibrahima is so helpful whenever a student or teacher needs a hand.
Ibrahima is one of the older students at the MindLeaps Center.  His father has been deceased since 2010. His mother could no longer afford school fees or rent so he dropped out of school and lives with his friend.

He is very shy and quiet, but incredibly respectful and helpful to everyone. Whenever anyone needs help, staff or student, he seems to be the first one there to lend a helping hand.  Ibrahima hopes to become an electrician one day in the future.
​

Ibrahima, now 21, completed the MindLeaps program in 2018. He comes from a family of four siblings and attended private school through the 8th grade, when his father passed away. His mother was a housecleaner and couldn’t afford to continue paying his private school fees. He enrolled in public school, but found himself in a situation with large classes very different from what he had been used to. After finishing 10th grade, he dropped out because he didn’t feel he was getting anything from his classes. After leaving school, he sometimes worked with his uncle, a building contractor, as part of the painting crew.
Ibrahima had other ambitions, but his family still didn’t have the means for him to take up further schooling or training. He heard about MindLeaps and enrolled in 2017. At first, he didn’t like the dance classes. He was shy, lacking in confidence, and dance was new to him. He didn’t really try and just wasn’t involved. But MindLeaps instructors encouraged him and explained that putting in the work and completing the program were necessary steps to moving ahead to vocational training. Staff also helped him understand that MindLeaps was not a place to become a dancer, but a place where you danced to feel good about yourself. Gradually his confidence grew. He committed himself to working in class and steadily improved. He even started keeping an eye on the younger kids, making sure they were doing what they were supposed to!
​
After successfully completing the program, Ibrahima was sponsored to enroll in vocational training. He’s now in his third and final year at a training center for the hotel and tourism industry (Institut de Stratégie de Tourisme, d’Hôtellerie et de Gestion), specializing in restaurant/bar. He faced some challenges in his first year, as he had been out of school for some time. He was shy and somewhat of a loner, but with the positive feedback from his instructors, and with the continuing support of MindLeaps, he began to open up. As with Ibrahima, MindLeaps staff stay in regular contact with all its sponsored students, to be there for them if any problems come up, and to provide guidance and support. Ibrahima is now among the top students in his class. He’s well-spoken and courteous, and has a winning personality well suited to the client contact his specialization demands. During breaks from school, he has been working nights at a restaurant and has also filled in at year-end festivities. Ibrahima is on the way to realizing a new and promising career.
​