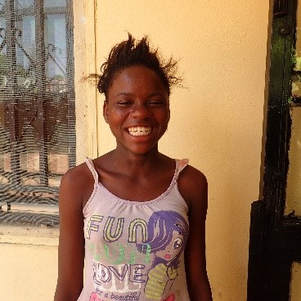 Hobbies: Playing games with her friends


​​Maïmouna's most urgent dream for the future is to learn how to read.
Maïmouna lives with her aunt. She has 10 brothers and sisters. She had to drop out of school last year when she was in 5th grade because her father could no longer pays the fees. She survives by begging with her aunt and helps around the house by collecting water.

​But Maïmouna always has a big smile on her face. She loves playing "coca", a hand-clapping game with her girl friends at MindLeaps. Her favorite classes at MindLeaps are dance and English. When asked about her dreams for the future, she said that right now she wants to be able to read.

Maïmouna, now 18, joined the MindLeaps program in 2019. Before coming to MindLeaps, she had gone through a number of changes in her life. Her parents separated and her mother remarried. Maïmouna was living with her father, but when he passed away, she was left in the care of her grandmother. She had been in school, but in 2016 dropped out of 5th grade and started working as an apprentice in a sewing workshop. She learned to sew, but left after three years because she didn’t like that kind of work. After a few months at home, she heard about the dance, English and French classes at MindLeaps and enrolled in the program.
Maïmouna says she felt good at the MindLeaps center – she had friends and got the attention and support that were sometimes missing at home. She successfully completed the program, with the skills necessary to move on to vocational training. MindLeaps is now sponsoring her studies at the Centre de Formation Post Primaire de Kipé, where she’s specializing in pastry making. With continuing guidance from the MindLeaps team, she’s now taking on adult responsibilities and pursuing an occupation that will allow her to support herself. Maïmouna is learning baking techniques and is already thinking of selling the birthday cakes she loves to make. Her dream is to one day open a restaurant where she will be a pastry chef.
​Support Maïmouna: www.mindleaps.org/donate