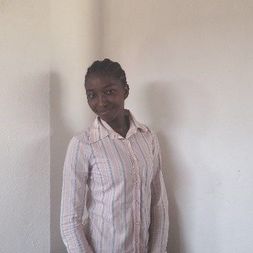 Hobbies: Spending time with her nephew

​Mariame works in the market selling fish to support her family.
Mariam lives in the Hamadallaye neighborhood with her aunt, sisters and cousins. Seven of them share one bedroom. Like many MindLeaps students, Mariame had to drop out of school in order to work to help support her family. Mariame works in the market selling fish during holidays. Her favorite food is “foo-foo” which is a cassava dish. She said, "Sometimes we have food. Sometimes not." Whenever she has some free time, she enjoys playing with her five year old nephew.​

Mariame greatly enjoys IT training and hopes to become a computer programmer or electrician one day.  She has also said she would be interested in being an ambassador.
​

Mariame, now 23 years old, had finished primary school in her home town, but there were no public secondary schools in the area, so her parents sent her to live with an aunt in Conakry to continue public school there. She completed secondary school, but didn’t pass the final exams to get her diploma. Her aunt was living on very modest means, and Mariame earned a bit of spending money for herself by braiding hair. Her parents, who were small farmers, also helped by sending food staples from time to time. All in all, it was not easy to get by.
Through a friend, Mariame heard about MindLeaps, and at age 19, began dance and English classes at the MindLeaps center. She wasn’t comfortable at first. Mariame was very shy, as she had never danced before and was the oldest student in class. She was embarrassed to dance in front of the younger children. And her self-esteem was low at this point because of another problem. Mariame had a badly-formed tooth that she always tried to hide. She rarely smiled and held back from interacting with the other kids. MindLeaps arranged for her to see a dentist and the tooth was removed, which was a real turning point. Mariame became much more at ease in her surroundings, smiling and laughing with the others.
In spite of all her early challenges, Mariame showed the determination to succeed. Gradually, she got used to being in dance class and began mastering the skills taught. With her boosted self-confidence, in time she became one of the best of the girl dancers at MindLeaps. In 2019, she was selected to be part of the MindLeaps Performance Group, and has performed publicly with the group three times to date.
In 2018, Mariame was sponsored by MindLeaps to begin a vocational training program at a hospitality and tourism institute, with a concentration in pastry preparation. She is now in her third and final year of the program, and is already putting into practice what she has learned. She’s now making cakes on her own and selling them. No longer shy, Mariame has gained the self-confidence and valuable skills to move forward.

Mariame is being sponsored in 2021 by Kasie Scott. Please choose another student here.