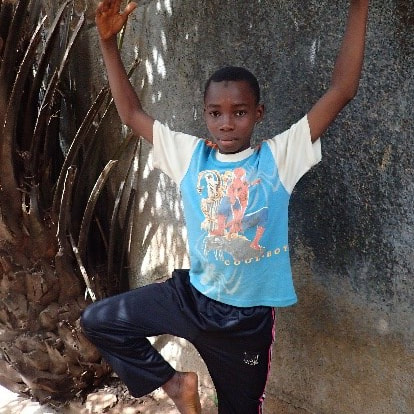 Last year of school attended before dropping out: 3rd Grade


​Salifou enjoys languages and hopes to become a translator (...or a professional soccer player).
​
Salifou only made it to the 3rd grade before needing to drop out because his parents couldn't support him. He lives with a friend of his and his step-mother is the one that gives him food.

Everyday on the roads in Conakry, kids and teenagers play intense games of soccer and every day after classes at the MindLeaps Center, Salifou can be found at the game on the corner of the road near the center.  ​Salifou LOVES soccer and wants to be a professional soccer player. Salifou plays number 9 and his favorite player is Messi.

In other interests, his favorite dance move is the C-Jump. Another of his favorite things to study is languages, and he can see himself becoming a professional translator or teacher as a future career.
​​

Salifou, 15, comes from an area somewhat outside Conakry, where his parents are in the fish business. Where he lived, access to schools was limited, so in 2012, his family sent him to stay with friends in Conakry, where he could begin primary school. Unfortunately, it turned out to be a poorly run private school and closed, leaving his family in debt over the lost school fees, without the resources to continue his education. He returned home, where he stayed with his mother and father, out of school, for two years.
Salifou came to the attention of MindLeaps when the Conakry center was opened in 2017, and at 12 years old, he was enrolled in the program. At MindLeaps, Salifou benefited from not only the dance and English classes, but also other support such as the center’s lunchtime meal program.
Salifou mastered the core competencies of the program and was selected to be part of the MindLeaps Performance Group. He was also sponsored to return to school, beginning year 3 at a primary school within walking distance of his home. He has now moved on to his 5th year and is doing well. Now that he is back on the path to education, Salifou says science and history are his favorite subjects.