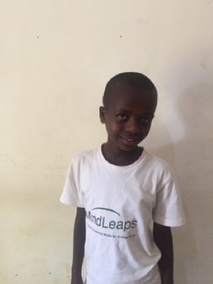 
When she grows up, Sumaya wants to be a minister of education.
​
Sumaya lives with her single mother in Nyamirambo. Before MindLeaps, Sumaya only ate when her mother was able to find temporary work. They faced extreme financial struggles, so much so that even washing their clothes was often too expensive. Although they still struggle to eat and get by, Sumaya has benefitted from the MindLeaps program immensely and is happy to attend school and eat every day. She hopes to become a Minister of Education in Rwanda to help ensure that all children are able to go to school in the future.
​

Sumaya joined MindLeaps in 2015 and is now 13 years old. She came to the program after dropping out of school in grade 4 as her mum could not afford to pay for food and school fees too. Sumaya lives with her mother, but they still struggle as her mum does not have a stable job, so she finds temporary jobs like washing other people’s clothes for them, so that she can earn money to buy food. Sumaya and her mother share a close relationship – it was her mother who heard about MindLeaps and brought Sumaya along to enrol her. Her mother is very supportive of her and only wants the best for her; she just does not have the means to support her financially.

When Sumaya first enrolled in the MindLeaps program, she was very quiet, isolated and lonely. However, over the years she has enjoyed participating and learning in the dance program, and she has re-enrolled in school where she has been working hard.
The last year has been particularly difficult for Sumaya, as her house and entire neighbourhood was destroyed by heavy rain. The Rwandan government gave the families affected by the flooding shelter in a school, where Sumaya and her mother stayed for a while. Thus, for the first six months of the pandemic, they relied on the meals provided by MindLeaps as this was the only food they had. During this time, Sumaya could not do her homework properly and she only had access to a radio receiver. She did what she could, but understandably, this was a very complicated time for her.

In June 2020, the MindLeaps virtual academy was introduced to Sumaya’s cohort of children. This was a more exciting time for her, and she looked forward to participating in the virtual academy. This in itself is an achievement, because it is very common for girl’s her age to drop out of school. However, in Sumaya’s case, despite these very challenging times, she remained positive and was excited to be able to return to school, whenever it would reopen.

Sumaya is now in grade 6 at Cyivugiza Primary School and is working very hard for her national exams this year. Despite the challenging last year, she has a very decent record at school, and has great chances of passing her exams well. In general, she has become much more stable again and is attending school and remains focused there. Her favourite subject is mathematics, but she loves school in general! She is always competing to be in the top 5 students in her class, as well as among the top of the MindLeaps students in academics! Sumaya is also mature for her age and knows how to ask for support when she is finding something difficult. This way, she never stops learning!

Sumaya hopes to be accepted into a boarding school after her national exams as this would allow her to focus 100% on her schoolwork and not have to worry about her problems at home, including having food to eat each day.
In 2019, Sumaya was awarded a scholarship to take extra ballet classes each week at City Arts in Kigali, where she attended classes with foreigners working in Rwanda. She is not in the performing group at MindLeaps as she prefers to dance for fun, and she also prefers to dedicate her time to studying and helping her mother.
​
Sumaya has changed a great deal since joining MindLeaps. She is now very interactive, has many friends, and talks a lot. Sumaya’s best friend is Raisa who joined the centre at the same time as her and studies in grade 6 too. Sumaya says that she is much happier overall and that MindLeaps has taught her how to express herself. Furthermore, when she first joined the centre, she was dancing for enjoyment, but now she is working hard towards a greater goal, and she knows how she can achieve this. Sumaya aims to pass her national exams this year with good grades, be accepted to boarding school, and in the future, she dreams of becoming the Rwandan Minister for Education! She is a very determined girl and is among the strongest and bravest girls at MindLeaps. We are so proud of Sumaya – clearly, she has had a lot to overcome, but she always remains resilient and wants to be the best she can be.
​

Sumaya is being sponsored in school by Stefanie Boffoli.